I am a little behind in blogging my projects as am powering through with dyeing and getting the shop set up – nearly there – but am trying to catch up on the posts now!

I had Relax finished in time for our trip to Hastings a while ago now and figured we would find some interesting photoshoot backdrops as the place is so picturesque in a run down, weathered kind of way (which I love), so we took the camera out early one morning and came across the old Pier at low tide.  I could have stayed down there all day, it was so gorgeous! All barnacles, rust and blue sky peeking out of the grid-like struts. It was like living in a (good) drawing with all the perspective lines around us!

Unfortunately we had only been shooting for a couple of minutes before my old Lumix battery died! 7 years old, I think the battery has seen its last as it is no longer holding a full charge. I nearly had a fit from the frustration! Hiss! Grrr!

When I got home and loaded up the pictures I saw that we did manage to get a couple of decent shots which were usable. Thankfully.

I found this pattern a gentle meditative knit, which was a pleasant surprise. It is clear, easy and well-written – thank you Ririko!

I only made a couple of mods, one of which was unintentional! Instead of doing 1×1 garter rib for the hem and sleeves I did 1×1 rib as I misread the directions and missed the alternating knit row at the hem! A bit of a shame, as I really like this detail on the original, but hey ho…such is life (actually I am not sure this is called garter rib, but that is what it would look like – a bar of knit stitches and then a bar of garter.)

I didn’t change needle sizes, and just used the same 3.5mm for everything. Oh, and of course I used a Bias Bind Off on the front neck, as mentioned previously. I flipped the body inside out after knitting it in the round (I still can’t convince myself of the need for seaming, especially in fingering weight yarn) and knit the sleeves stockinette for a subtle contrast. I love how the reverse stockinette looks in this semi-solid yarn and it knit up so evenly I didn’t even block this before wearing! I just gave it a light steam on the ribbing and was ready to go. This was a first for me…this yarn is a star!

Fingers crossed, I will be getting skeins of this BFL/Silk up in the shop for the end of the week and will let you all know when it is live! Exciting.

Oh, and out of sheer stubbornness I turned the camera back on again later in the day, hoping to be able to document the crazy, grubby alley we found behind the old, abandoned Hastings and St Leonards Observer building…and it worked! Here is another picture of me WITH head making one of my funny faces. 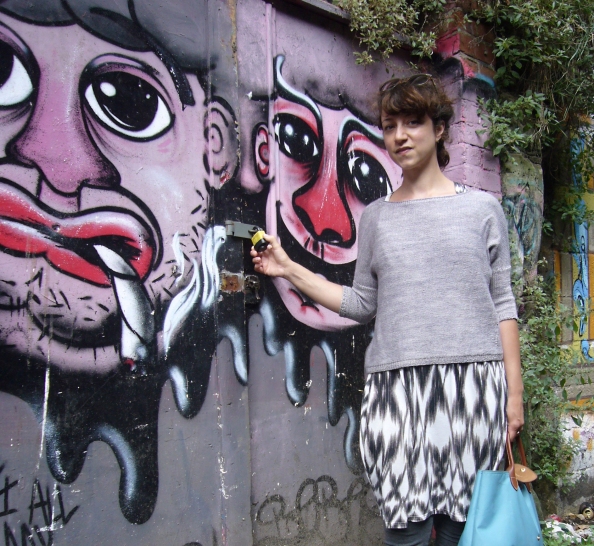 I had to try the lock…wouldn’t you? 😉

ps. What do you think of the new banner? Better, no?

I’d meant to do this post last week, but thought I had deleted the photos from my camera before uploading to the computer. But lo and behold, when I went to download photos from our trip to the seaside this weekend (more on that later), there they were!

So here, somewhat delayed, is something I meant to highlight visually for those of you out there that might not yet have encountered the wondrous Bias Bind Off!

My Relax was a pleasant, quick knit and all that stockinette moved along so effortlessly that I got to the bind off on the back of the neck in no time. I was blithely knitting away as per the pattern instructions and was almost finished, when I woke up out of my blissful knit coma and  realised how jarring the plain bind off was turning out. You can see the stepped effect below between the rows and the way some of the stitches are pulling out of shape between them.

This is when I had my ‘doh’ moment and remembered the amazing Bias Bind Off technique that I first tried out on my Audrey a few months ago. I’d like to say that I frogged back and redid the neckline…but I didn’t as it was the back of the neck and I am too damn lazy! However I did dig out the instructions for the Bias finish for the front and this is the difference below – a clean sloped edge that creates a smoother join when you are picking up for the neckline.

If anyone hasn’t already tried this bind off, it is super simple and just requires a slipped stitch to be worked at the beginning of each ‘tier’. You can see the written instructions and a video on the technique at New Stitch a Day.

It is definitely a keeper for the technique file! You could use this stitch for a raw edge on a neckline and not have to add an edging it is so clean! 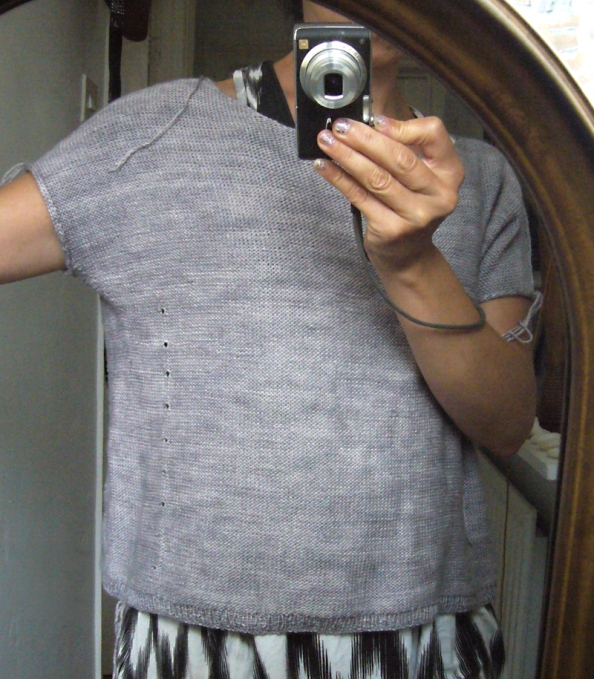 Started Ririko’s Relax the other day in a beautiful BFL/Silk I am testing.

I’ve been wanting to do this one for ages, but kept putting it off in order to get other projects done then decided this silvery yarn is so perfect for this pattern that I must have it NOW!

This yarn was a bit of a pleasant surprise. I’d initially earmarked it as ‘scarf/shawl’ knitting as it felt a little delicate to me with the high content of silk and I thought it wouldn’t wear very well.

How wrong was I? The BFL in this makes it a workhorse! It is super strong – takes a huge effort to break the 4ply strand – and performed exceptionallly well in my wear tests with only minimal abrasion fuzzing. And the best thing? It shaves absolutely clean with no matting or damage to the fibres beneath and after a few shaves stops fuzzing at all. A real winner. Here it is below AFTER testing and with no re-blocking or shaping whatsoever. 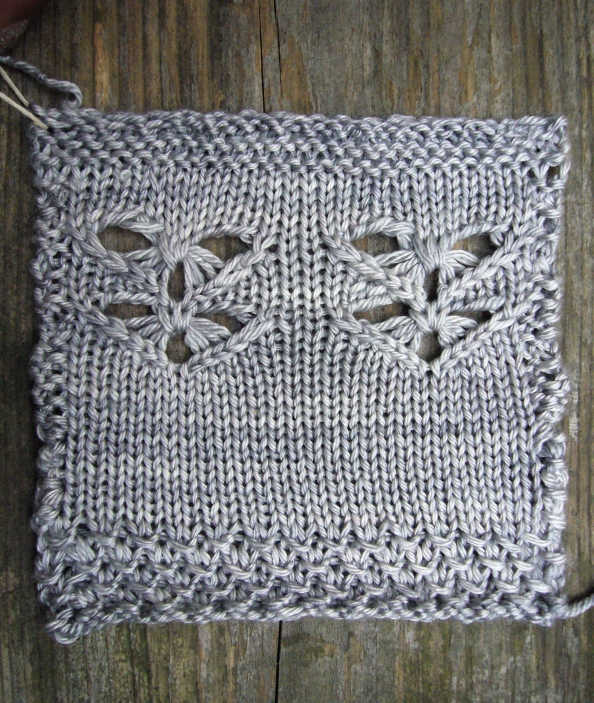 As new as after its virgin blocking, with no warping at all! The blend creates a light, airy, slightly ‘dry’ feeling fabric perfect for lighter knits like this pattern.

I’d initially felt that the enormous expanses of stockinette were a bit daunting, but am finding it the perfect summer garden knitting in this yarn! Look at how far I got over the weekend: 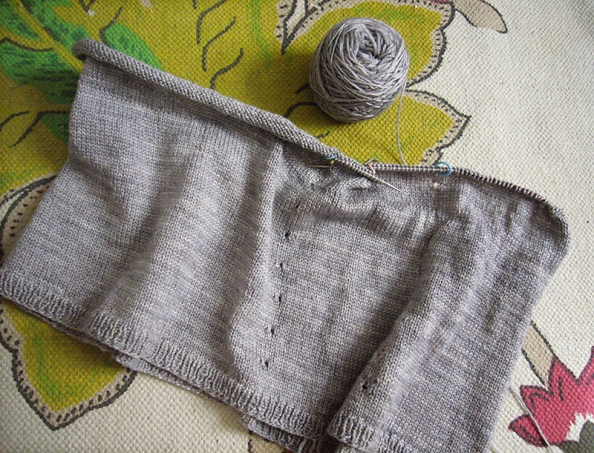 I am having a dilemma that occurs to me quite a bit, though. I keep looking at the reverse (purl) side and thinking I like it better than the RS. 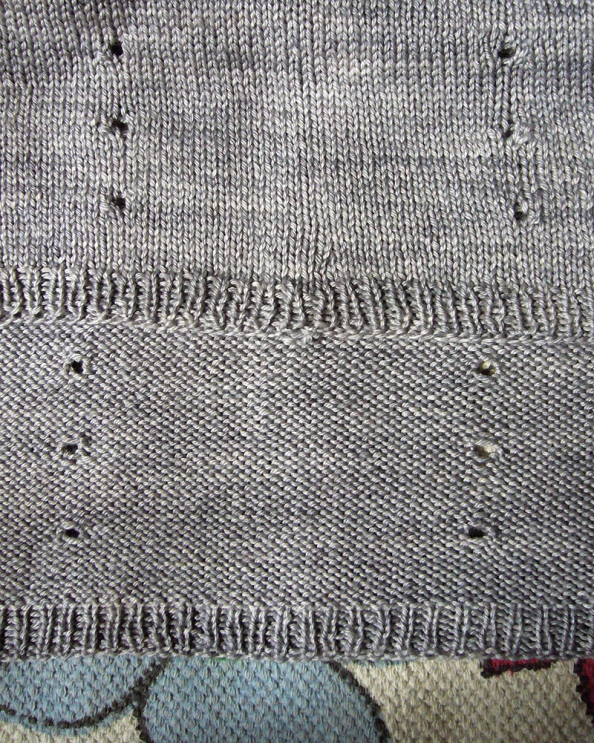 Am currently thinking of reversing the body and having stockinette sleeves for a little contrast. Sounds good, no? Slightly ‘Humanoid‘. YUM. 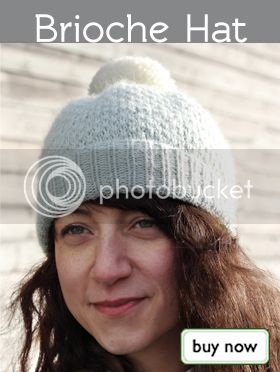